(Photo: Confirmation Class of 1929​)
For a complete history of the parish, see our 125th anniversary book
How Unsearchable His Ways by Fr. William Cambell (c. 1965)
PDF VERSION

Bishop Kenrick, who founded the parish, wrote in his diary on December 22 of that year:
"A chapel was opened in Schuylkill Fourth Street near Spruce. Rev. E. Sourin preached,
the Rev. Daniel Devitt celebrated Mass... I have rented this house for a time, with the
hope that in a short time a church might be built in the vicinity." 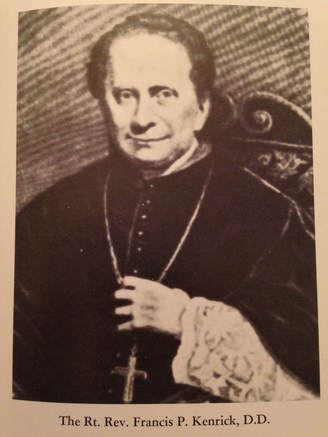 Kenrick also founded Charles Borromeo Seminary in his own home,
before having it legally incorporated in 1838.

The first pastor, Rev. Daniel Devitt, celebrated Masses in a carpenter's shop
for nearly two years, during which 331 baptisms were performed and 60 marriages.
The first couple to marry was Charles Kennedy and Margaret Clark on January 1, 1840.

On June 1, 1841, Devitt finally purchased a new plot of land for $6,000. It would
take 23 years to pay the mortgage, reflecting the poverty of the parish in that age.

​The first church (designed in brick by Napoleon LeBrun, the same architect as the
current cathedral, SS. Peter and Paul), was completed on December 5, 1841,
and blessed by Rev. Michael O'Connor, V.G., of County Cork. The sermon was preached
by Rev. Patrick Moriarty, O.S.A., missionary to India and founder of Villanova.

Read an article on the arrival of the
Dominican's to St. Patrick's here.

A visual tour of the ​upper church...

​A look at our parish hall,
currently serving as home for the
Philadelphia Youth Orchestra